​​​​Pomeranians are the tiniest of the Spitz, or Nordic, breeds, but they have the courage of much bigger dogs. A perennially popular breed, the Pom weighs less than 8 pounds, but you won’t often find him in a puppy purse. That’s because Pomeranians think big. They know they have four feet and prefer to use them, just as larger dogs would.

Everything about the Pomeranian is bright: his eyes, his temperament, and his intelligence. Though he’s very fond of his family and delighted to get some lap time, he’s also a busy little guy. You’re more likely to find him trotting around your house on an important mission than snoozing on the sofa.

The Pom’s activity level makes him an ideal pet for someone who wants a small dog with the personality traits of the full-size sled and herding dogs from which this breed originates. Because he’s tiny, he can probably get enough exercise indoors, but he’s happiest when he gets to go on long walks, chase leaves, and play with other small dogs. He is athletic and frequently participates in dog sports such as agility, freestyle, obedience, rally, and tracking. Because of his diminutive size, he is suited to life in an apartment, but he is just as at home on a ranch or estate. However, he’s far too tiny to live outdoors. He needs to live inside with his family.

Pomeranians have a profuse double coat that needs regular brushing but are otherwise easy to care for. And, make no mistake, Poms bark. It may not be deafening, but it can be annoying and difficult to stop, even with training. As with many small dogs, Pomeranians may be harder to housetrain.
A Pomeranian can go to his new home at 8 to 10 weeks of age, but sometimes  I like to keep pups until they are 12 to 14 weeks old to make sure they are mature enough to go to their new homes.

​Tiny and bright-eyed, the spunky Pomeranian greets the world with endless curiosity and a sure sense that he’s the cutest thing around. He is clever, adaptable, and happy, whether hanging at home or performing as a top athlete on an agility course. 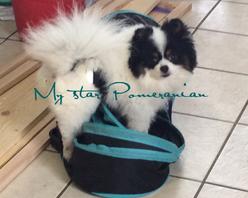 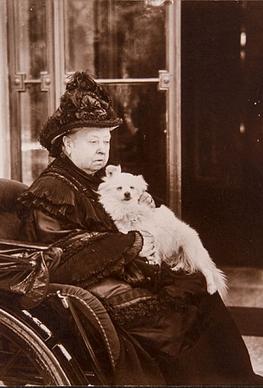 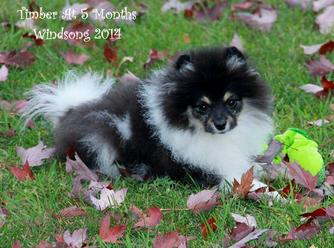 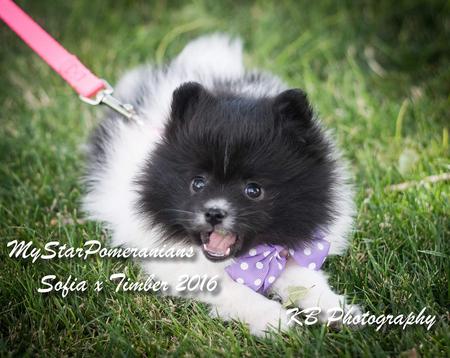 The original Pomeranians weighed 20 to 30 pounds — much larger than the Pom that we know and love today. 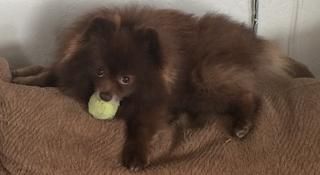 Pomeranians are prone to dislocated patella (kneecap), slipped stifle, heart problems, eye infections, skin irritations and tooth decay and early loss. It is recommended that they are fed dry dog food or crunchy Milk Bones daily to help keep the teeth and gums in good condition. Newborn Pom puppies are very tiny and fragile. Three newborns can be held in the palm of one’s hand. Dams on the smaller side often need to deliver by cesarean section. When the dog is old it may become molted with bald spots.

The Pomeranian is good for apartment living. These dogs are very active indoors and will do okay without a yard. Be careful they do not overheat in hot weather.

Poms need a daily walk. Play will take care of a lot of their exercise needs, however, as with all breeds, play will not fulfill their primal instinct to walk. Dogs that do not get to go on daily walks are more likely to display behavior problems. They will also enjoy a good romp in a safe, open area off lead, such as a large, fenced-in yard.

The Pomeranian's very long, double coat should be brushed frequently. If you work from the head, parting the coat and brushing it forward, it will fall neatly back in place, so the task, although time-consuming, is relatively easy. The cottony undercoat is shed once or twice a year. Dry shampoo when necessary. Clean the eyes and ears daily and take the dog for regular dental checkups. The Pomeranian is a constant shedder.

The Pomeranian got its name from the region of Pomerania, which is now the area of Germany and Poland, where it was developed from the ancient Spitz breeds. The original Pomeranians were much larger, weighing up to 30 pounds, and worked as sheep herders. Marie Antoinette, Emile Zola, Mozart and Queen Victoria all owned Pomeranians. In 1870 the Kennel Club in England first recognized them as a breed. In 1888 Queen Victoria began breeding and showing the dogs. It was she who started breeding them down in size, making the breed very popular in England. The Pomeranian was first recognized by the AKC in 1888. Some of the Pom's talents include: watchdog, agility and performing tricks. Poms make superior circus performers.

​The Pomeranian is a proud, lively little dog. Intelligent, eager to learn, very loyal to its handler and family. The Pom is a wonderful companion and showdog. The breed's docile temper and affectionate nature endear it to many. They are alert, inquisitive and active: one of the most independent of the Toy breeds, they need a firm, gentle hand. Its liveliness and spirit make it well-liked by persons who do not usually care for toy dogs. They may be picky eaters. If it is properly introduced they usually get along with other dogs and household animals without any problems. Poms make good little watch dogs. Teach this dog early that it may bark a couple of times when the doorbell rings or when there are visitors, but then to keep quiet. Be very consistent about this. Poms have a delightful nature and do not cling to their handlers. This happy pup is good at learning tricks. Pomeranians need to see their owners as boss or they will become very demanding. If you allow your dog to tell YOU when and where to do things than you have a potential problem on your hands and you may not even realize it. It is not cute or smart, it's dominance and will lead to bigger problems in the future if it has not already. Because of this breeds tiny size and it's adorable Ewok looking face, there are a very high percentage of Poms who fall victim toSmall Dog Syndrome, human induced behaviors, where the dog believes he is pack leader to humans. This can cause many varying degrees ofbehavior problems, which are NOT Pomeranian traits, but behaviors brought on by the way they are treated by thehumans around them. Behaviors include, but are not limited to separation anxiety, willful, nervous, bold and sometimes temperamental, not hesitating to attack much bigger dogs. Guarding behaviors, and excessive barking as they try and tellTHEIR humans what THEYwant them to do. They can become reserved with strangers, barking at them excessively, and sometimes growling, snapping and biting. Because most humans treat this tiny canine in such a manner that the dog does not see them as pack leader, they are not recommended for children. However, if a Pom is given rules to follow, limits as to what they are allowed to do, daily pack walks and a calm, self-assured pack leader who displays confident assertion towards the dog, this can be a well rounded, mentally stable, trustworthy, wonderful family companion. Because of its size, it can make a good companion for an elderly person.